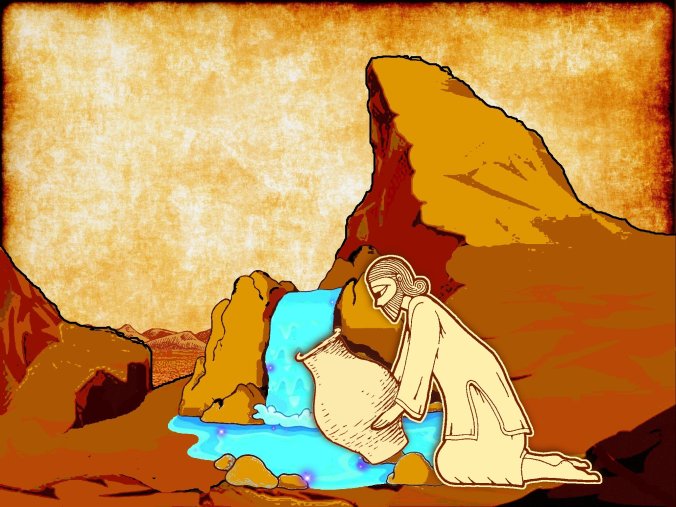 When I talk of Religion I mean more specifically organized religion, whereas spirituality is a very personal experience.  But as soon as you try to organize it into a set of beliefs and create around it an institution, you have a religion.  Institutions are prone to corruption, which is often the case, and can be used as a means to control and exploit people.  A religion may be founded on the most virtuous principles, but those principles can easily be lost as soon as you introduce fear and greed.  Then it becomes political.  And the followers, rather than deepening their own experience, become mechanical, blindly accepting and following without any understanding of the of those initial principles.

This story takes place in a barren land where water is very scarce.  So scarce in fact that the people who lived there were constantly thirsty, though they didn’t know what it was they were thirsting for.

He cupped his hands and drank, and immediately he was refreshed.  So overwhelmed with joy was he that he quickly returned to his village to tell the others of his discovery.

His story was met with a mixture of awe and skepticism.  But even those few who believed him could not be bothered to make the journey.

“If what you say is true,” replied one man, “Then why have you not brought this water here for us to drink?”  And with that, the crowd dispersed.

“Very well,” Trishna said to himself, “If they will not come to the water, then I shall bring the water to them.”

He gathered up an empty vessel and carried it up the mountain where he filled it with the crystal clear water of that sacred spring.  Then, returning to the village he proclaimed, “I have returned with this life-giving water.  Come, each of you, and drink.”

The people of the village gathered around, and one by one they took the vessel to their lips and drank.  Over the next several days the people gathered in this way, so that each one might taste this refreshing water.

He consulted the medicine man of the village who requested to see the vessel.  The medicine man began to inspect it, and looking inside he proclaimed, “Here is the problem.  This water is contaminated.”

“But how can that be?” asked Trishna.  “I gathered it myself from the spring.  It was a clear as the sky and now it has become murky and dark.”

“It is very simple,” replied the medicine man.  “Each time a person drinks from this vessel he takes a little water and with his lips he contaminates what remains.  This water sits without moving and the contamination of all those who drink from it begins to stagnate.  This water that was once pure has now become poison.  You must throw it out.”

Trishna did as the medicine man had instructed and threw out the water.  But this did not deter the people from coming and demanding to drink from the vessel.  Trishna tried to explain to them that the water had been contaminated, and that it had to be thrown out.  But they would not believe him.

That night Trishna was visited by a wealthy merchant.

“What can I do for you?” Trishna asked.

“I heard you tell the people that the water had become contaminated and had to be thrown out.  But I know the truth.  Everyone has been drinking from the vessel, and the water has run low so you are keeping the rest for yourself.  But I am a wealthy merchant.  Let me have just one small sip.  I will pay you whatever you like.”

“No.” replied Trishna, “I am telling you the truth.  The vessel is empty.  See for yourself.”

Trishna showed him the vessel and the merchant saw that it was indeed empty.  He left disappointed, but only to return a short time later.

“What is it you want now?” asked Trishna.

“I have come for the vessel.” Replied the merchant.

“But I have already shown you that the vessel is empty.”

“I know,” replied the merchant.  “And I would like to buy it.  Name your price.”

“But it is just an empty vessel,”  Trishna explained.  “Without the water, it has no value.  I could not, in good conscience, sell it to you.  If you want it, keep it.”

The merchant thanked him and took the vessel.

The next day as Trishna walked through the village he saw that a crowd had gathered at the merchants shop.

“Come, one and all,” the merchant called out, “And receive the blessings of the sacred vessel.”

The merchant had cleared his shop of all its stock and had placed the vessel upon an altar.

“This sacred vessel has been bestowed to me by the Prophet Trishna, who has charged me to keep it.  And now as the keeper of the sacred vessel, I offer you its blessings.”

“Let us drink!” the crown commanded.

“Then how shall we receive its blessing?” the crowd inquired.

“Because of my purity I have been bestowed the duty to drink upon your behalf,” The merchant explained.  “It is by my taking of the sacred water that you will also be purified.  But in order for me to act as a conduit of this power, my energy must be maintained by your offerings, so that I will not become depleted.”

With that the people began laying offerings at the foot of the altar in order that they might receive a blessing.  And in turn the Keeper took the vessel to his lips and tilted it upward to the sky.  And in this way was the tradition carried down by all the keepers of the sacred vessel, for many generations to come.

So, if it is not already clear I will explain the analogy.  The water represents living spirit which is pure and ever flowing.  And the vessel represents religion, which is the attempt to contain that living spirit.  But what gives that spirit its potency is its fluidity.  As soon as you try and cut it from its source, try to contain it, to organize it, begins to lose that potency.  It begins to stagnate.  And furthermore, as more and more people come to taste it, they also contaminate it with their own preconceived ideas and materialistic tendencies.

You see, it is our materialistic tendency to organize into groups of hierarchy.  This is the way in which government is established and maintained.  And this same tendency is carried over into organized religion. Religion then becomes a sort of government.  But this is not simply the idea of being governed by God.  There are all of those who set themselves up as intermediaries, the priests, the rabbis, the gurus, the popes and so on.

Religion is meant to free us from the restraints of such social constructs, but instead becomes just another construct which limits us.  The spirit upon which it is initially founded is pure in and of itself.  But the organization is man-made, and is therefore prone to the materialistic tendencies of man, such as greed for riches and lust for power.  In time that spirit is squashed out and all that remains is a political shell, an empty vessel.  From the outside it has all the appearance of spirituality, but on the inside it has all the tendencies of a political organization.  The priests become politicians.  They become ambassadors and the like.  They set themselves up as a medium between the people and that divine spirit, as if to suggest that a medium is necessary.  But in actuality they often stand in the way, preventing us from having any real personal communion.  And the political motive of this is very simple.  If you must connect to the divine through a medium, then you must pay a price.  And so it has become a very big business.  But don’t think for a moment that the medium is actually going to bring you any closer to that spirit.  For one thing, they would not want you to make direct contact.  If you knew that such contact were possible, you would have no need for a medium, and this very idea is bad for business.

This is why Jesus was killed.  He was telling the people that they could experience direct communion with the divine.  He was telling them that the Kingdom of Heaven was within them, and that priests were unnecessary.  And the priests were furious.  But more than this he pointed out that these priests were not even in direct contact with spirit themselves.  They were charlatans and hypocrites.  They were essentially merchants, selling false hopes.  He was a very big threat to their business.  And so they colluded to have him killed.

So the concept of organized religion is very well-intended, but the application of it is often contrary to that intention.  Again, I want to make clear the point that corruption in religion says nothing of the spirit upon which that religion is based, but everything about the men who maintain it.

In the story we saw how this corruption took place, and how the people were being poisoned, but we were not given the antidote.  The antidote is very simple.  Return to the source.  Those who had become ill from drinking the contaminated water could have become purified by simply returning to the spring and drinking directly from it.  And this is also the antidote for those who have become poisoned by corrupt religion.

If you take most religious traditions and trace it back to its root, you often find a spiritual teacher who was not really interested in organizing anything.  And you will find that these great teachers were not well received by those who were interested in organizing religion.  In fact, they were often seen as a threat to any and all forms of social establishment, not because they were overtly rebellious, but because they were often passively non-compliant, and they encouraged a deeper personal communion with the divine.

Take all of these great teachers and look at the essence of what they taught and you will find that each of them drew their wisdom from the very same well.  You will undoubtedly discover a common thread which ties all of them together like beads on a necklace.  And if you find in any religion anything that deviates from that common thread you can be sure that it was not derived from that common well, but has been concocted by someone else and added to the story.

Because of the corruption and hypocrisy carried out in the name of God, many people have abandoned organized religion.  Many have turned their backs on God.  And some have even declared an intellectual war against him.  But I’m not suggesting that we abandon our spiritual pursuit.  What I am suggesting is that we abandon the need to rely on the middle man, and that we turn within to see for ourselves what is there, and rely on no authority other than our own.

One thought on “The Difference Between Spirituality & Religion”