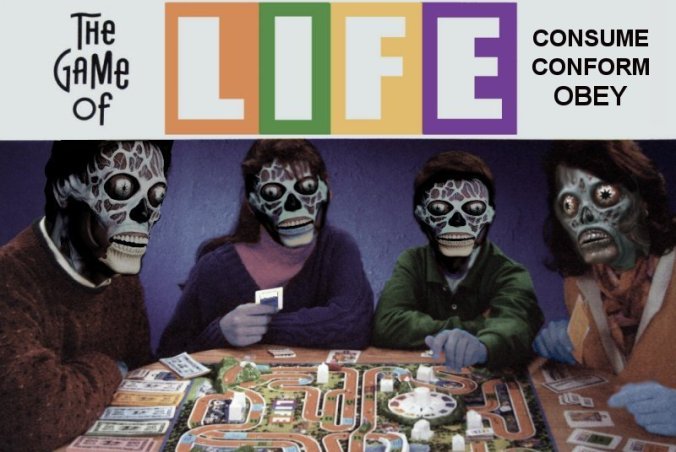 First there is the concept of property, by which we are taught that certain things belong to us and other things to others.  In reality nothing belongs to anyone.  We might possess something but to say that we own it is merely a mental idea.  The world existed long before any of us were here, and although we have the ability to transform matter, we cannot create it.  So what gives us the illusion that anything can belong to us?

Although it’s all just a silly game, most of us take it very seriously and some are willing to enforce the rules of the game by any means necessary, including murder.  Those who acquire the most property and who exert the most force become the masters of the game.  They are privileged to create the rules and to change them to suit their own desires.  These masters of the game are actually just a very small number of people in comparison to those who are subservient to them, and the only reason they have any power at all is because it is given to them by general population.

What is interesting to note is the way in which the general population is taken advantage of by the game masters, often to their own detriment, and yet they willingly play along.   They could easily overthrow the game masters, or simply stop playing.  But instead, they submit and the game goes on.

When we were born into society, we were registered into the game.  When I say that we were registered, I want to be very clear that none of us consented of our own free will.  We were never asked if we would like to play.  None of us were given any option other than to play along.  Participation in the game has always compulsory and begins at birth.  Of course, none of us knew what was going on.  We were far too young to understand.

As we grew up we learned the rules of the game.  We learned the proper way to play along.  We weren’t told that it’s a game because a big part of the game is pretending that it’s not a game. And we became so engrossed, so accustomed, so serious that we mistook the game to be real.  Of course, no adult ever told us, because most adults have become so engrossed that they don’t realize it’s a game either.  Everyone becomes so skilled at playing their part that they lose themselves in their role.

Now, there have been some people from time to time who have figured out that it’s all just a silly game, and some of them decided to stop playing.  But this is not as easy as you might think.  The game is so widespread and so invasive, and there are so many people playing it with such seriousness that it is close to impossible to simply quit the game entirely.

If you wanted to quit the game entirely, you would need to go someplace where the game is not being played, and such places are very difficult to find.  If you did find such a place it would likely be very far away from other people.  But most of us would not want to do that.  We are social animals, after all.  But even if you were willing to be completely alone, you would need to go someplace where no one would ever go. Because even if you found a secluded place, if another player were to find you there they would likely try to bring you back into the game.  They might claim that the land you’re on belongs to someone or that the way you’re living isn’t in line with the rules.  They might try to chase you away or force their rules upon you with violence. They may abduct you or even kill you.  Because the game is played with such seriousness, it can be very dangerous for those who don’t play by the rules.

While it’s close to impossible to quit the game altogether, it is possible to reduce one’s participation.  You may still have to play along, but if you understand the game, you can play lightheartedly rather than seriously.  You may even find that you can play to your advantage.  While it is extremely difficult to find any place where the game is not being played, you can reduce your participation.

One reason why the game is very difficult to quit is because we have become so dependent upon it.  Because we are animals by nature, we require basic necessities like food, water and shelter.  Those who control the game do so because they have control of all the resources.  And in order for us to have access to those resources we must trade time and labor.  We trade our time and labor for credits which we can then exchange for products and services, which include even these most basic necessities.  However, if we can utilize our time, labor and credits in the proper way we can use them to secure some of these resources for ourselves.  We can secure land and learn to grow and produce our own resources.   In addition we can reduce our consumption of those products and services which are unnecessary or even detrimental to the quality of life.

When we come to understand our dependency upon the game, we will also realize that those in control are equally dependent.  They are, in fact, dependent upon our dependency.  As I stated before, the only reason they have any power at all it because we afford it to them.  We afford it to them by remaining dependent upon them to ration out resources.  So, the more we become independent, by producing our own resources, the less power they hold over us.

Now, what is unfortunate for us is that they also understand this.  And they would do all they can to prevent us from becoming independent.  They make it very difficult to quit the game.  In order even to secure resources for ourselves we have to play their game.  And it is very easy to get trapped in the process.  Even when we do find ways to produce our own resources, the game masters find ways to regulate those resources with more rules.

For instance, in the game you are allowed to trade credits for land.  And by doing so you get to pretend that you’re the owner of that land.  In reality, no one owns the land.  But as far as the game is concerned, the game masters own everything.  So even when we get to pretend to own an area of land, the game masters maintain their rule over it.  They still decide what you are permitted to do on that land, and how you may do it.  If you want to build a dwelling, for example, you will have to seek their permission, and it will likely cost you some credits.  In addition, they will manage the construction by telling you what kind of dwelling you are permitted to build.

In many ways, the game masters offer us the illusion of freedom.  But freedom is the last thing they want us to have, because, as I said before, they are dependent upon our servitude.  So they will permit some things, but they will always seek to maintain some degree of control.  Allowing us the illusion of freedom is one way to maintain that control.  As long as we believe that we are free, we won’t attempt to escape.

Now here’s where things get really interesting, because the truth of the matter is that we really are free, and we always have been.  There was never a time, nor will there ever be a time when we will not be free.  The only reason it appears otherwise is because we have collectively relegated our power to a select few, who have thus in turn used their own freedom to hold that power against us.   By their own free will, and our free choice to submit, they use force and fear to persuade us to remain subservient.  They really have no right at all to exert power over us, except we have agreed to it.

We do in fact have the freedom to quit the game at any time.  But unless a great number of people quit all at once it will be very difficult for the individual.  As long as the majority continues to play, they reinforce the game.  They do this because it’s familiar, because it’s comfortable.  Or they do it because they’re afraid.  Most people are afraid of the game masters.  They fear that if they stopped playing, the game masters would punish them.  And it’s likely that they would.  This is why it’s very difficult for any individual to stop playing.  But what most people fail to realize is that they outnumber the game masters a million to one.  If everyone stopped playing all at once, the game masters could do nothing to stop it.  The whole game is a structure built upon the foundation of our servitude, and if enough people simply walked away the entire structure would collapse.

But who is going to walk away from a game they don’t even realize they’re playing?  This is why we go on playing.  We don’t see that it’s a game.  And even those who do begin to see are afraid that if they stop playing they won’t have access to resources, or they may be punished for not participating.

In reality the game masters do not punish anyone.  They have their servants to do that for them.  Their servants are just other people, like you and I, playing their role in the game.  But their role may be to enforce the rules of the game and to punish those who break the rules, and they often take their roles very seriously.

So we have to understand that the influence of the game masters is very dangerous.  They are self-serving, greedy and have little regard for the well-being of anyone but themselves.  So if we wish to avoid their hostility, we must tread carefully.  We must continue playing just enough to keep them unperturbed, while at the same time, finding ways to become gradually less dependent.  It is a delicate balance, like walking on the razor’s edge.

So many people are currently engrossed in the game that it’s likely the game will go on for quite some time.  It has already gone on for thousands of years, and it could go on for thousands more.  But as more and more people become aware of the game, the sooner the game will end.  To end the game doesn’t mean to overthrow the game masters with force or violence.  This has been tried a thousand times and it is those who overthrow them who become the new masters of the game.  And so the game continues.  The only way to end the game is for the majority to simply stop playing.  There is no need for violence in this.  Violence is just one of the ways we participate in the game.  The way to quit the game is simply to stop participating.

So I encourage you to find creative and inspiring ways to open the eyes of others to the reality of the game.  As more and more people awaken to this reality, the more we can help one another to withdraw from it.