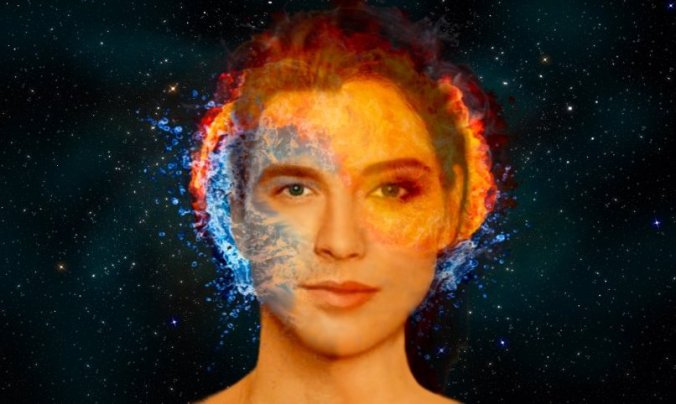 It would seem, in most cultures, that we derive much of our personal identity from our biological sex.  And in such cultures there are strong divisions between men and women regarding societal roles and behavior.  These gender roles are conditioned in us from such an early age that we grow to assume that they are natural.  And if one deviates from these cultural standards, that person is often judged or ridiculed.

When we talk about spirit there is often the mention of masculine and feminine principles.  These are described as polarities, not so much as opposites, but as counterparts to a whole.  In other words, there can’t exist one without the other.  They’re like two sides of the same coin.

It’s important to note here that when we speak of the spiritual, we do so by use of material terminology.  That is to say that we use analogy and metaphor that relates to our material experience in order to conceptualize the otherwise inconceivable.  So when we speak in terms of masculine and feminine, this really has nothing at all to do with gender.  And we must be very careful to understand this.  Otherwise we make the mistake of falling into cultural stereotypes.

Unfortunately humanity has already made that mistake and we have carried it on from generation to generation through cultural conditioning.  We have been taught that men and women are to think, feel and behave in certain specific ways according to these masculine and feminine archetypes.  But because we have made the mistake of confusing masculine and feminine principles with biological gender we have created a great imbalance, not only within the psyche of mankind, but in the external world as well.  After all, the external world is merely a reflection of our internal state.

Now when we speak of these archetypes in relation to ourselves, the characteristics become a bit more specific.  For instance, the Feminine represents not only creativity, but also compassion, nurturing, intuition, sentiment, sensuality, receptivity and a loving service.   The Masculine represents strength, stamina, logic, reason, protection and providence.  Another way to look at it is to say that the Masculine is head-centered, and the Feminine is heart-centered.  Or we might also see it as right-brain and left-brain thinking.

As we can see, each characteristic has a corresponding counterpart.  For example, one of the prominent masculine qualities is strength, and its feminine counterpart is vulnerability.  But to have one without the other transforms strength and vulnerability into domination and submission.  Another example would be reason and intuition.  But to have one without the other makes reason heartless and intuition irrational.  Again, this is why it is important to restore balance between the two.

Now we often observe that many people tend to exhibit one polarity more strongly than the other.  Typically it is men who tend to exhibit masculine qualities, while women tend to exhibit feminine qualities.  But in cultures where gender roles have become more lax, there is more variety in this kind of expression.  What this suggests, of course, is that much of our behavior is determined by cultural conditioning.  But when cultural conditioning is removed, there seems to be no correlation between these characteristics and ones gender.

What you find in more liberal societies is that people do not conform to specific gender stereotypes.  It is not always in balance however.  Because humanity has been so strictly bound to gender roles for so long, once those constructs are removed, people will often swing from one side of the spectrum to the other.  Thus, you find men who are extremely feminine in nature, and women who are predominantly masculine.  In addition, you find many people who are afraid that if they embrace the other polarity, they will lose the one which seems to correspond with their biological gender, and so they try very hard to repress certain characteristics while emphasizing others.

When it comes to romance, it is interesting to notice that we are often drawn to someone who seems to embody those qualities (masculine or feminine) which appear opposite to our own.  It’s as if subconsciously we are seeking to find balance.  But when we’re unable to acknowledge this, what we find instead is conflict.

One of the great romantic myths of our culture is that we are incomplete and that there exists some special person who is perfectly matched to us, like two pieces of a puzzle.  But the truth is that we are already complete within ourselves.  We just don’t recognize it.  There are aspects of ourselves which lie dormant, often repressed due to social conditioning.  And often the purpose of meeting what appears to be a “soulmate” or “twin flame” is to awaken those aspects within us.

So let’s suppose, for example, that we embody the quality of emotion and intuition, and our partner embodies the quality of reason and logic.  If we are only utilizing one of these qualities without the other then we are not seeing the bigger picture.  It’s as if we only have one leg to stand on.  Our partner is there to offer us the opportunity to awaken that corresponding quality within ourselves.  However, if we are unable to recognize this then we might remain stuck in one aspect over the other.  Our partner may accuse us of being irrational, and we may accuse them of being cold.  Conflict ensues and we find ourselves drifting apart.

There is really no such thing as being “too emotional” or “too logical”.  It’s only when one of these is lacking that there is disproportion, and from that disproportion conflict arises.  So the purpose of our partnership is not to diminish either aspect, but to restore balance between the two.  It is not the purpose of our partnership to achieve balance by each partner embodying only one polarity.  Nor is it the purpose for partners to exchange polarities.   We already have both polarities within us.  We’ve have just suppressed one in favor of the other.  So our partner is there to help shine a light upon it, and bring it out of hiding.

Sometimes we think that if we embrace too much these feminine qualities we will lose our masculinity, or that by embracing our masculinity we will lose our femininity, but it doesn’t have to be this way.  The key is to embrace them both in harmony.  Again, we have to understand that these energies have nothing at all to do with gender, and that they are complimentary of one another.

In order to restore balance between these two polarities, we must become aware of our own characteristics and behavior.  It may be that we are predominantly masculine or predominantly feminine in some ways more than others.  Simply by understanding where we are on the spectrum, and by understanding which characteristics correspond with one another, we can begin to bring everything into alignment.

One thought on “Restoring Balance Between the Masculine and Feminine”